Hello and welcome to 5 O’Clocktail.com. In my first-ever blog, I will be determining definitively whether a margarita is better made with Cointreau or a “lower-shelf” triple sec.

For years I thought Cointreau and triple sec were two different things. When in fact Cointreau is just a brand name that has become synonymous with its product, like Kleenex is to tissue.

So what exactly is triple sec? With any triple sec, you will notice the sugariness, and that’s no accident. The liquor, after all, originates from the sweet teeth of candy makers.

The first triple sec was invented in 1834 by Jean-Baptiste Combier and his wife Josephine, confectioners by trade, in the French village of Saumur. Their concoction consisted of “sun-dried orange peels from the West Indies, local spices from the south of France, alcohol from France’s northwest, and secret ingredients from the Loire Valley,” southwest of Paris, according to the Combier website.

The Cointreau concoction didn’t come around until many years later – 1875 to be precise. The son of master confectioner-turned-distiller Edouard-Jean Cointreau extracted a spirit from sweet and bitter orange peel, with a “highly crystalline robe,” which was a “major novelty at the time,” according to the brand’s website. He also invented the “square-sided amber-coloured container, the modern version of which still remains the signature of Cointreau liqueur to this day.”

So for comparison this evening, I am pitting Cointreau against Monin triple sec. I’ll first taste each neat and describe them on colour, consistency, smell and taste. 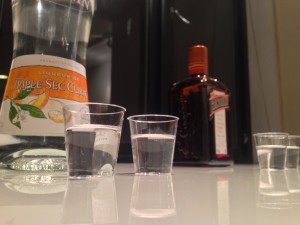 Colour: They’re both nearly the same – crystal clear – although there was a slightly gloopier reflection with the Cointreau.

Consistency: The gloopy comment may have been tainted by the fact that when I poured, Cointreau oozed out like a slightly thicker liquid, not quite cough syrup but slower than pure water.

Smell: I thought Cointreau had a light flowery smell that Monin triple sec didn’t have.

Now how do they compare in a margarita? 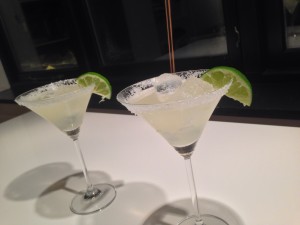 So if I had to choose, I would choose Monin – a lower shelf triple sec than Cointreau – for a margarita. However, I will leave it up to you. Why not throw your own taste-test party this weekend?

My next post will teach you how I make my margaritas compared with my Dad’s traditional recipe.