“That drink looks a little too girly for me,” my dad said, as I begged him to take a sip of my pink concoction.

One swig later and he agreed: “Whoa!” 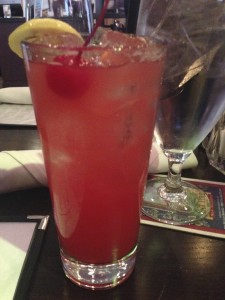 Hemingway’s ‘Papa Doble’ cocktail is, in a way, like the great American novelist himself: macho and headstrong with a sensitive side.

Funny enough, both the drink’s brawn and flowery appeal are due largely to grapefruit juice, which is mixed with cruzan rum, lime juice and maraschino juice.

Rum-based drinks can sometimes be too syrupy for my taste, but the tart grapefruit in this Double Daddy keeps you from feeling a sugar rush.

I first discovered the Papa Doble with my pops during happy hour last March at a wonderful bar/restaurant in Wilmington, Delaware called Ernest & Scott Taproom — named for the great writers and imbibers.

I can’t confirm whether the Papa Doble ever brushed the moustache of Señor Hemingway, but I’d like to think he’d approve.