This year I turn 30 and as an ongoing theme I am developing some totally original cocktails inspired by my favourite sweets as a 13-year-old girl. Think: 13 Going on 30.

One of my preferred sweets as a young teen was Sour Patch Kids. (As you can see, I had a sour tooth long before I was legally allowed to drink margaritas!)

My challenge last weekend was to make a cocktail that brings to mind those  wonderfully chewy bursts of flavour.

So here’s what I tried:

I combined 2 SHOTS OF WHITE WINE and ½ SHOT COINTREAU into a shaker. I then grabbed a HEAP OF SOUR PATCH KIDS and chopped each little man in half, hoping this might somehow release more flavour. I then chucked the poor lads in with the wine and Cointreau. I closed up the shaker, shook everything up, and stuck the container in the fridge, where I kept it for 15 or so hours.

After that time, I strained the contents into a wine glass and topped it up with SCHWEPPES LEMONADE.

For a bit of dressing, I stabbed the poor fellas and lined them up on a swizzle stick. This seems so cruel now that I write it! 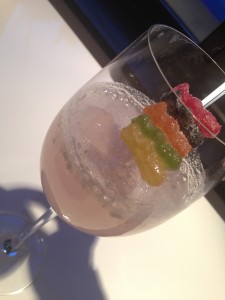 What did I think?

I should say this drink turned out a lot prettier than I thought it would. I love how the Sour Patch Kids turned the white wine and Cointreau mix pink. How 13 and girly is that?

As far as the taste goes, I would have loved a bigger sour slap in the face, but that probably didn’t happen for a number of reasons.

The first is that Sour Patch Kids aren’t really sour. I’d say they are tart. (Their chewiness offsets the sting a bit.) Luckily, the majority of the candy’s flavour is in the sugar that coats the outside of the sweet and all of this was well infused into my wine/Cointreau base – meaning the resulting cocktail tasted sort of like a Sour Patch Kid!

I thought the flavours could have squealed out a bit more though. Here’s what I might try next time.

2)   I will add an extra ½ shot of Cointreau to the base mix. It could add a bit more bite.

3)   I will try different white wines. For this experiment, I used Jacob’s Creek Semilllon Chardonnay. The subtleness of a good Sauvignon Blanc, for example, could make that wine a better mixer.

Finally, I might not cut those poor lil’ guys in half again. I’m not sure it lets out any extra flavour. Plus it’s just cruel. Take a look at what happens after sitting in that mix for 15 hours: 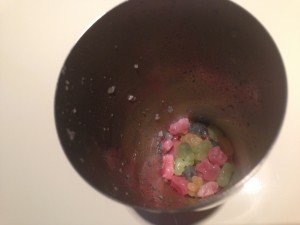