Over the next few days I am going to be talking about rum. I thought I’d start the conversation with a great recipe from my dad. As a veteran sailor and soon-to-be captain, he knows a thing or two about rum.

I’ll let him tell you about his cocktail in his own words:

I was introduced to a mixed drink several years ago by a friend that described it as a, “Great summer drink.” He mixed Bacardi Superior with a splash of Rose’s sweetened lime juice, into a tall glass with ice and added Canada Dry tonic water. I found the drink absolutely refreshing on those summer evenings.

A few years ago I introduced a friend of mine to the drink at his summer wedding. He was hooked. Hooking a fellow sailor on a rum drink? Not hard at all! My newly married friend said this is great, but try it with Cruzan rum and no lime. I admitted Bacardi has more alcohol taste and Cruzan rum brought that smooth rum taste through the thirst quenching tonic water. But I missed the taste of lime. So I reintroduced the juice of a medium lime to the drink.

Now some people like to explain their favorite drink to a bartender, but won’t it be nice to give the drink a name? I think a perfect name for this drink would be: Summer Cruz. 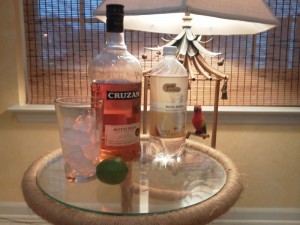 Juice of one medium lime

Pour the rum and lime juice into a the glass. Fill the glass with tonic water. A slight stir, add a wedge of lime, and drink responsibly.