Anytime I am feeling blue about the cold, I think back to my family’s trip to Jelly Fish Joel’s last summer.

This little tiki bar, in a tucked away cove of the Chesapeake Bay, is a bit tough to get into with a large boat. Our shallow-water alarm went off more than a few times as we navigated the narrow entry. Smiling sunbathers lounging near palm trees on the shore looked close enough to toss us a beer. 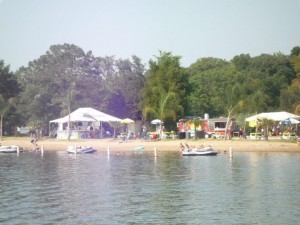 Shortly, we found a sweet spot among a party of other boats and dropped anchor.

Before motoring over to the bar in our dinghy, we all decided to take a dip.

The next thing that happened has become something of a mystery in my family.

When we jumped into the water, it was not tepid but warm, like bathtub hot. It was July but, come on, we’re talking about an offshoot of the Chesapeake, not the Gulf of Mexico. It was quite a thermal shock. Then when we swam a few feet it was, all of a sudden, cold. A few feet later, we were back in Clearwater.

Since that day we have shared a few educated guesses on the cause of this strange hot-n-cold phenomenon — for instance, were we swimming over hot spring leaks? We have never found out the truth.

Anyway, the bar. There’s not a large selection, but what is on offer is frozen and delicious. Jelly Fish Joel’s gave me my first taste of a Rum Runner. 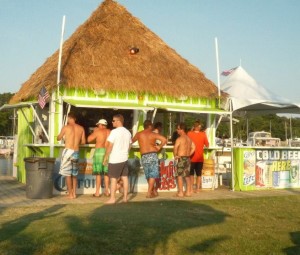 Just the right sort of thing to keep you jamming along with live bands and dance parties in the sand, all while the sun sinks below the bay.