“The exhaust on my Volvo is very warm.”

“Do these ring any bells?” I asked the bartender at Nordic Bar.

“No,” she said, staring at me as if she was about to cut me off before I even ordered my first drink.

I wasn’t drunk or hallucinating. These were real menu items — well, shots — once served at Nordic Bar, the Scandinavian hideout on 25 Newman Street in London.

I was a regular for a couple of years after it first opened back in 2007. It was kitsch. It was ironic. It was random. It was fun. ABBA always hummed in the background. No matter the season, the bar TV replayed downhill skiing competitions. In the back, a large triptych of Swedish actor Max von Sydow showed you how to properly skoal.

I never worked out if the reindeer head on the wall was real.

Times have changed. The place has been under new management for a couple of years now, according to the bartender. Sadly, most of the silly Nordic flair is gone — apart from some ABBA photos glued to the wall.

The hilarious drinks menu has been mostly scrapped and what’s left is only vaguely inspired by Nordic culture. Have no fear, though, aquavit is still included.

Yet you can still have a fantastic night here. I dare you to spin the shot wheel behind the bar. Good luck if you land on Husky Poo. 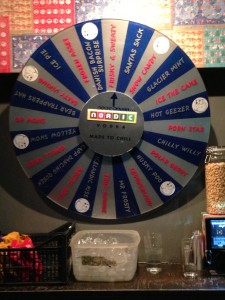 There’s also one drink on the menu that will probably have me coming back. We’ll get to that later.